In the fall of 2009, I was in North Korea, with the EB team checking on patients and monitoring the programs at one of their care centers.  As per normal, the morning progressed with many patients milling around, waiting, giving sputum samples, being weighed and measured, photographed, getting xrays and being educated about their TB treatment. 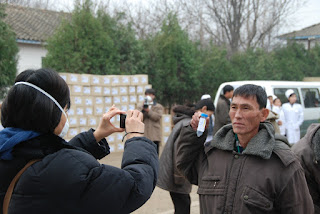 As I moved around the patients documenting the work of EB, I noticed a young girl standing to the side with her father.  Her face was solemn and she had expressive, dark brown eyes that were taking in all the activity.  It was unusual to see a child with the patients, as normally children are treated at the children's hospital.  I smiled and greeted her ... she was so serious for such a young age.  She looked up at her father and on his nod, a fleeting smile crossed her face and she bowed back at me.  As I continued into the day, I wondered about this child and I guessed she was here with her father, maybe supporting him as he came for treatment. 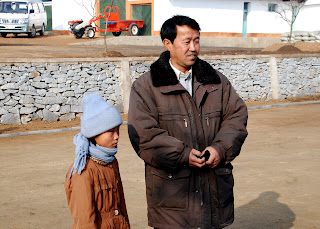 As the day unfolded I found out a little more about her.  Eun Joo was her name.  When I met her, she was nine years old.  Her father was a director of one of the TB care centers.  He had been diagnosed with MDR TB and they suspected Eun Joo now had it too.  That day she provided a sputum sample, which was later confirmed to test positive for MDR TB as well. 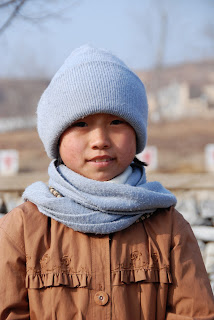 As we talked with her and her father, more of her story came out.  Both of Eun Joo's parents are doctors.  When she was just three years old, Eun Joo had TB  - not in the lungs, but in her larynx.  To save her life, they had to perform surgery and she has had a trach tube in ever since.  She breathes unfiltered air through the tube and can only talk in a very raspy whisper.  That day, Eun Joo was accepted on the EB program and was able to start treatment.

18 months passed and I visited the North again.  I was thrilled to see Eun Joo - she was now testing negative for MDR-TB, and was still in the midst of treatment but had blossomed.  She was looking much healthier and had the most radiant smile.  EB were able to give her some colored markers and paper and she promptly sat down and drew a thank you picture to her sponsor. 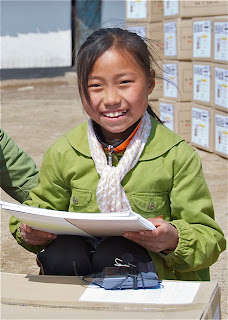 However, the sad part of her story is that in those 18 months since I had last seen them, EunJoo's father suspected her mother had MDR TB and he shared his drugs with her.  This is never a good thing.  Just because a patient tests negative for TB, does not mean they are done with treatment.  They have to stay on their medicine and maintain their negative status for about 18 months.  When a patient does not see their drug treatment through, the MDR TB strain they have can build up resistance to the drugs and develop into a far worse strain - XDR (extreme drug resistant TB) for which there is no cure.

What would you do in this situation?  There are no drugs available for you unless you are accepted on to a program such as the ones that EB support.  You love your family and you know there is no hope without treatment.  You know that very few patients get on such a program.  Out of desperation, Eun Joo's father took the risk and shared his drugs with his wife. Later, EB were able to get the wife onto the program as well so that she could have her own medication.

Fast forward the story to Fall 2012.  Ms Horne was thrilled to be at the graduation ceremony of Eun Joo and her mother, whilst visiting the North on the fall trip.  Both of them are now cured of MDR TB thanks to the donations of sponsors.  The bittersweet side of the graduation ceremony is that EunJoo's father will not be cured.  By sharing his drugs, he developed XDR TB and he exits the program knowing that there is no cure for him. 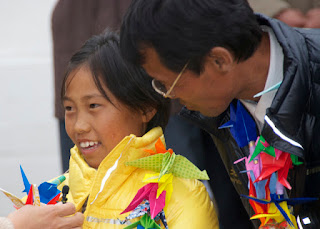 Eun Joo with her father at the graduation ceremony 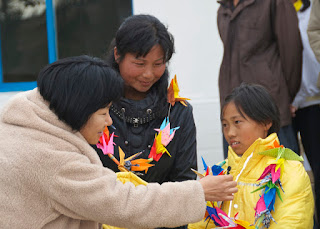 Eun Joo being interviewed by the EB team while her mother looks on.

Although Eun Joo and her family were not patients that SFS sponsored, she resonated with us and our students.  At her graduation ceremony, she wore cranes made by SFS students her age.  Students who have immediate access to any medication they need any time they get sick.  The story of Eun Joo's family, could be the story of any of the patients we support.  If we were born in North Korea, it could be our story.  TB doesn't just impact individuals, it impacts families.  It is easily passed on, and whatever strain a patient has, is the strain they will pass on.  There is a burgeoning problem of MDR TB in the country, and every center the EB team visits has streams of people coming, desperate for the hope of being able to be accepted into the program and starting treatment.  Every day, the team have to leave, knowing that although they were able to admit some new patients, the numbers are limited by the funds available.  Imagine yourself standing there looking at these people - each of them with a story, each of them with a family, each of them desperate for your help.  How would you decide?

This is one of the reasons why I love what we do here with our Dongdaewon fundraising at Seoul Foreign School.  It is not just about the money.  It is about people.  It is about giving hope.  It is about changing lives.  It is about creating a new day for each patient that we support.  All your hard work in fundraising directly impacts upon individuals and their families.  They are SO grateful for what we do, because they know without you, their treatment is not possible.


Thank you so much for all your hard work fundraising this year.

Together we make a difference.

Together we change lives.